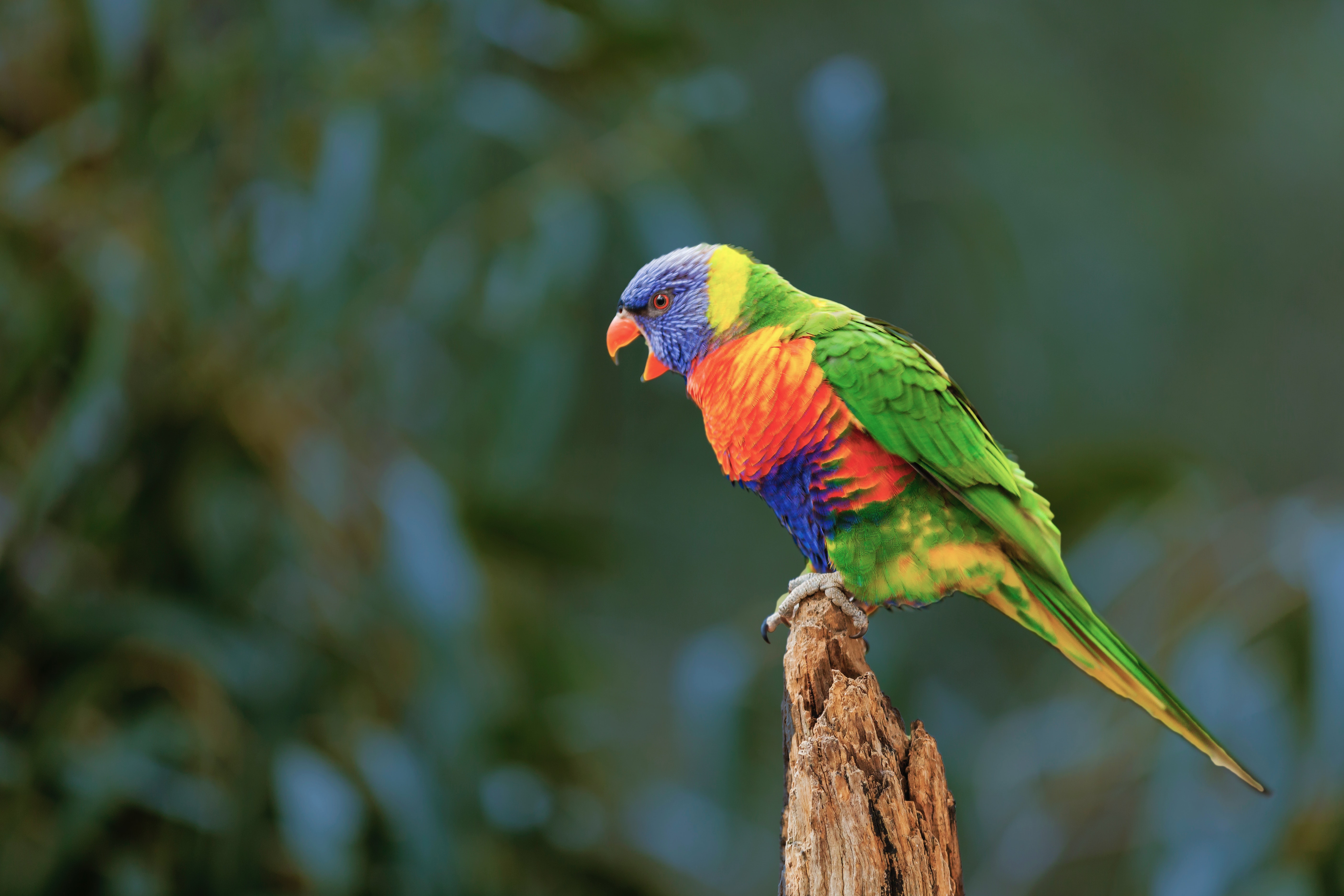 If the answer to all these questions is in positivity, then read the article, “How Come Parrots Can Talk?” Hopefully, all your queries will clear out.

The talking ability of parrots has aroused a charm to captivate them. Though parrots have already drawn the world’s attention to their captivating beauty, talking parrot is matchless.

How Come Parrots Can Talk?

Among all the birds, parrot, crow, raven, and mynah bird talk. They can imitate human speech. However, parrots are the most renowned talking birds.

Parrots can talk by changing the air that flows over the syrinx. Syrinx is present at the splitting point of the trachea into the lungs.

Parrots use varying sounds like squawks, chirps, and whistles to communicate in the wild. They use their vocal expertise to communicate as well as to fit in the flocks.

They are vocal learners. They produce sounds by listening and mimicking them. They can use a variety of dialects.

The bird that can talk produces soft, pleasant, and musical sounds. He can mimic the sounds they hear. However, Macaws, some Conures, and Cockatoos produce very unpleasant sounds just like the Macaws shrieks.

Types of Parrots That Talk

Alexandrines, Cockatiels, and Jardine parrots are also good at talking. Macaws can learn short phrases. They can learn up to 100 different words and can also use them in context.

Cockatoos have sweet and soft voices. However, is quite difficult. The beautiful colored Eclectus parrots have strong speaking abilities. They can even instantly mimic their owners.

Other than the captivating beauty of Amazon parrots, they have the clearest voices. They have the most accurate pronunciation abilities.

The African Greys are often regarded as the best communicators. They can not only mimic more than a thousand words but can also relate words to their meanings.

Parakeets cannot speak as clearly as the macaws. They are noisy birds. They whistle, talk, and chitter-chatter daily.

Parakeets talking is not the same as that of humans. They do not have vocal cords and cannot produce sounds using the larynx.

Parakeet’s anatomy makes it possible for them to produce sounds. Their beaks and airways are responsible for producing sounds.

How to Train A Parakeet to Talk?

Here are some guidelines to train a parakeet to talk. Parakeets are vocal learners. They can learn sounds from their surroundings by mimicking and imitating them.

Can you teach a parakeet to talk? Yes, you can. Always teach your bird like a baby. Take your bird to a silent room where he can hear you. Start from a short word like “Hi” or “Hello”.

How to teach a bird to talk? Pronounce the word clearly and in the same way each time. Repeat the same word about 10 times during each session.

Excessive repetition will tire out your bird so keep sessions not longer than 10 minutes. Reward your Parakeet after every right attempt.

The reward will make your bird understand that he is doing a good job. Be patient, I know you are eager to hear from your bird. Give a proper time to your bird to learn. Despite this, if he fails do not ever stop loving him.

How Do Parrots Talk?

Talking birds are the most popular pets. Humans enjoy these pets, and it is easy to make them your family member. Pet lovers are fascinated by the talking nature of pets, especially the bird that can talk.

The parrot talks by modifying the air which goes into its lungs through the syrinx and finally its vocal cords produce sound. When the trachea divides itself into lungs that is the place where the syrinx is located.

How to teach a bird to talk? Teaching parrot to talk, means the more quality time birds spend interacting with you, the more they learn phrases and repeated words.

Why Do Parrots Talk?

Parrot talks due to several reasons; some sounds feel pleasant to our ears whereas some are shrieks and noises only like Macaw and Cockatoo parrots.

Many wild parrots use whistles, squawks, and chirps for warning, to court, to communicate, or to fight to defend their territory. In short, they talk to express their extreme emotions.

Parrots create unique songs so that their mates will recognize them. They can produce two sounds at a time so that they can sing continuously.

Cockatiels can talk but only a few simple phrases. Parrot talking is unlike African Greys and Amazon parrots. To teach a bird to talk means repeat a single phrase in front of him, then let him master that one and then move to the other phrase.

Cockatiels can give you bedtime calls to remind you to go to bed. They can do that by chirping in a certain way.

Some unsocial Cockatiels can feel threatened and retreat to the corner of the cage. They produce a hissing sound and then you should understand that they want to be alone.

Birds That Can Talk

Nature has gifted us many birds that can talk. Now, the question arises in mind: do all parrots talk? They mimic the sounds and phrases around them. Budgerigars, Corvid, European Starling, and Hill myna bird talk like humans.

Wild Cockatoos in Australia learn human speech. Orange window Amazon parrot has been recorded saying “HELLO” to his visitors. Eclectus parrots can talk if they get training from an early age.

Macaws, Yellow-headed Amazon, Yellow-crowned Amazon, White-fronted Amazon, and African Grey parrots are the birds that can talk and learn by mimicking sounds around them.

Pet Congo grey is the talking parrot that can talk and learn words within the first year. But he speaks when he is 12-18 months old.

Yes, Budgie is the most common parrot that can talk. Budgies talk and communicate with each other. Despite this, they can also speak human words.

Can you teach a parakeet to talk? Yes, you can but bringing a one-year or older parakeet will keep you at a loss.

Budgie is also a famous bird that can talk. Budgies have a social nature, and they need to talk with other budgies and their human companions.

Budgies are not able to grasp the meaning of human words. They can only mimic these words. However, they can relate these words to some of your gestures.

Like if you always say “Hi” to your bird while entering the room. Then your budgie might consider its meaning as “to enter the room”.

Yes, Conures talk. Conure is also a talking parrot however his vocabulary is mediocre as compared to other parrot breeds. They can speak a few words and phrases.

Teaching parrot to talk, is one of the most difficult tasks. Conures do not have their vocabulary they learn by mimicking human sounds.

Conures learn talking by observing. You should develop a habit of talking to your bird regularly from day one. This habit will be gain for you.

Tell your Conure each and everything you do to him in simple colloquial words. It will help to make your Conure a good listener from the beginning and will also ease teaching.

In captivity, which parrot talk? Cockatoos are the parrots that have displayed speech abilities as a beautiful species on Earth. These parrots have sweeter and softer voices compared to others.

It is difficult to train them. Male species are easier to teach than females. The Yellow Crested Cockatoos are the one who are fair-to-good talkers. The Long-Billed Corella is said to be the “very clear speaker”.

Quaker parrots are the one who love to mimic sounds. Bird owners are in love with them due to this interesting feature. They can talk very clearly. They can learn a vast range of vocabulary and phrases.

Quaker parrots usually do not have ear-piercing shrieks. They are the “little chatterboxes”. Furthermore, these parrots do not have large bodies to make the loudest sounds.

Quaker parrots cannot sing like robins, but they do sing. They cannot make smooth melodies. If Quaker parrots are aggressive, they produce sounds like a warble. Their sound is very low.

Drawing towards the conclusion of my article, “How Come Parrots Can Talk?”. Among 350+ parrot breeds, some of the species can talk.

However, having no ability to talk does not mean that we do not value such parrots or birds. Many other birds can have such characteristics that parrots do not have. So, love all the birds despite their pros and cons.