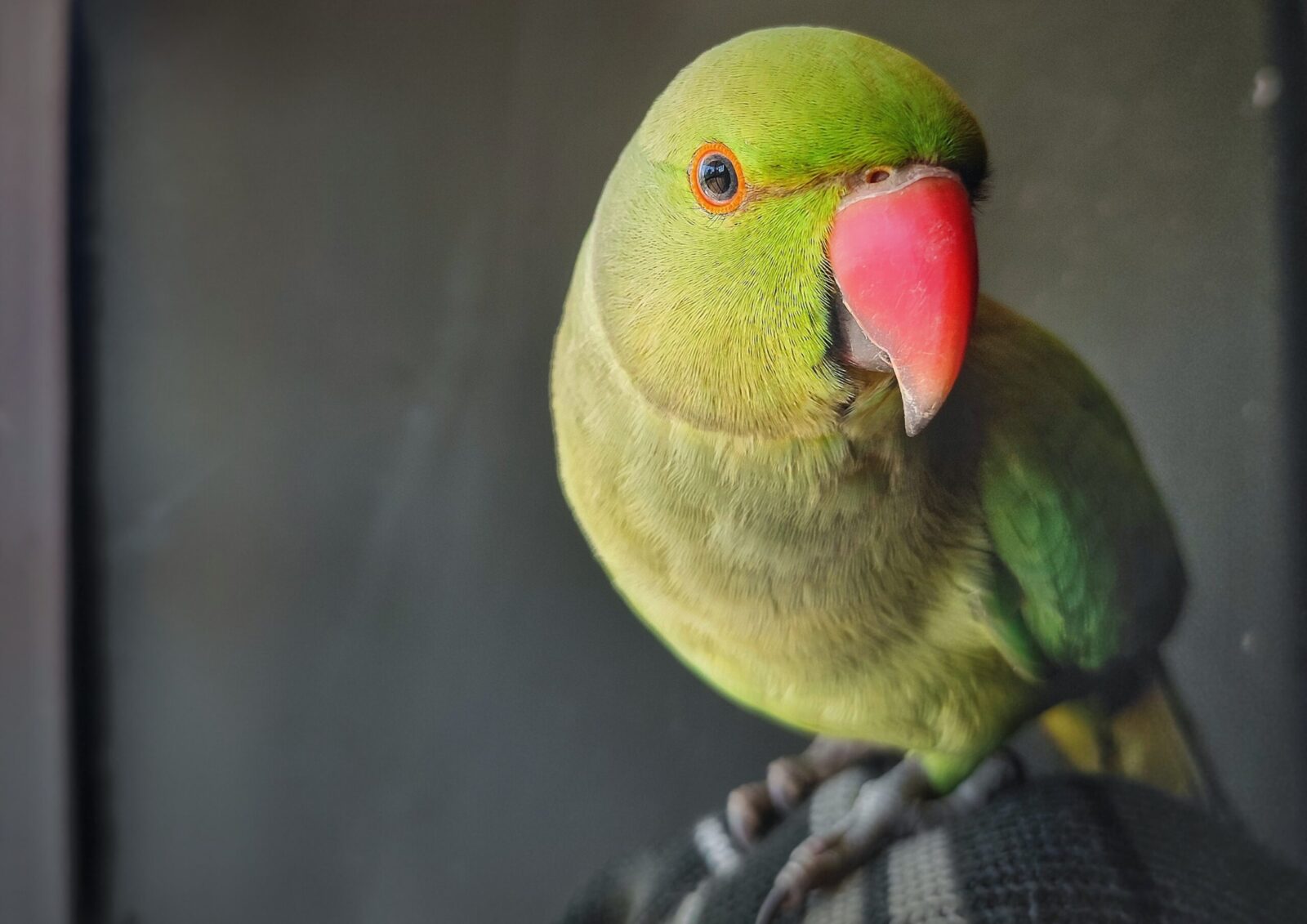 I know you are too excited to hear from your bird. Isn’t it? If you are scrolling to find your parrot’s talking age, then you are on the right blog. Just read out the article, “At What Age Do Parrots Start Talking?” I know you are too curious, so let us start without any further descriptions.

Though parrots are kept for their exotic beauty and impressive personalities. The extraordinary talking and mimicking abilities of parrots, have gifted them with additional fame. They can talk due to the additional layer inside their brain. Scroll down to read more about this.

Also Check: The Amazon Parrot Can Live About How Long?

At What Age Do Parrots Start Talking?

At what age do parrots start talking? Well, this question cannot be sharply answered. There is no exact age for a parrot to talk. However, a general notion says that a parrot can talk as early as few months old.

A parrot may take years to develop this ability. The talking age of parrots depends on various factors like the parrot’s species, personality, gender, and the most important one is your consistency towards his training.

There are about 350 species of parrots. However, all of them cannot talk regardless of which species they belong to. For example, if you have adopted or bought an older parrot, who has never been taught to talk. He will not speak even though you have spared no effort.

Among all species, different have varying ages when they start talking. Cockatiels and Grey parrots are among the chatty species. But species like Quaker parrots may take a bit longer time and effort to learn mimicking.

The parrot’s age to start talking also depends on how professionally you train him. The best way to teach is to repeat the same words or phrases regularly several times.

At What Age Do Parrots Start Talking? The more you improve your training skills, the sooner your bird will start chatting. The earlier you start training, hopefully, your parrot will start talking at a younger age.

The desire to do something new usually urges a parrot to learn new words. Every parrot has his personality, and curiosity to learn to talk.

However, some of them do not want to learn.  It is usually observed that the parrots that have a stronger bond with you, love to mimic you.

The last but not the least factor that could influence the parrot’s talking age is their gender. Research has shown that male parrots are more liable to talk than female parrots.

It is easier for the male parrots to learn to talk than the females. But again, I repeat, it could be a factor. It is not always going to be the same case every time.

Also Check: What Parrot Is Right For Me?

What Is The Best Talking Parrot?

The Amazons and African Grey parrots have the largest human word’s vocabulary. Amazon parrots are also the best singers of human music.

The African Greys are the best medium-sized talking parrots. They are fluent speakers, not many of them do not speak on prompting.

The cockatoos and macaws also have talking abilities. They are also good at mimicking as they are too intelligent parrots. But their vocabulary is not as rich as that of African Greys and Amazons.

Some small parrots like Alexandrines, Quakers, Jardines, and Electus, can also talk. They have a constrained vocabulary, however, Jardines can even learn phrases.

Also Check: How Long Does A Parrot Live?

How Do Parrots Learn To Talk?

Parrots can rarely learn their own to talk like mimicking ringing telephone or doorbells. But most of the time it is you, who train them to talk. To each your parrot to talk, you should start with short words.

It will make it easier for your parrot to mimic you. Better to start with general greetings like “Hi” or “Hello”.

To have effective teaching, you should replicate the word repeatedly. It is hardly possible that you utter any word, and your bird immediately picks it.

You should consider and treat your parrot as just a newborn baby, who is trying to learn to talk. You should have great patience. Till then, enjoy your parrot’s quietness!

Pronounce the word slowly and clearly, so they can mimic you. Parrots cannot enunciate anything that is mumbling. They are also unable to learn the words that vicissitudes every time you say.

You should try to make the same sound, emphasizing the same syllables every time. Research has analyzed that excitable and high pitch sound is easier for parrots to learn.

I know trainers usually get excited to hear from their parrots. Due to this, they may become frustrated and aggressive. You should repeat the word only 5-6 times during each session. It will be more than enough.

Excessive repetition will tire out your parrot. Your bird may lose interest. So, a 5-10 minutes training session is enough for your parrot.

Appreciation is the key to improvement. Always appreciate your bird when he is doing a good job. When your parrot has tried his best or has spoken to you, then give him a treat.

He will understand that he is doing a good job and will get a treat is whenever he will do so.

After this training, if your parrot has spoken to you, then do share your experience in the comment section.

How Come Parrots Can Talk?

Parrots are vocal birds. They can grasp the sounds surrounding them and can learn by mimicking them.

Why do parrots talk? Research has shown that all vocal learner birds have a part in the brain called as “song system”.

However, parrots bear two layers of the song system. The outer layer called “core” is common to all vocal learners, while the inner layer called “shell” is unique to parrots.

The shell has allowed parrots to be the best talkers and mimickers. Parrots mimic humans to make them fit in their human environment.

The domesticated parrots have all the basic ingredients to be a good talker. These include spare time, repeated training sessions, inspiration, and the most important is the mental ability.

The question is, do parrots understand the words they say? Words can have an association with feelings for parrots, but not complex meaning.

For parrots saying “Hello, how are you?” might means that someone is entering the room. It is because they have heard their owner saying so while entering the room, they are just mimicking them.

Pet Birds That Can Talk

In this section, let us talk about the 8 best types of talking pets birds. So, let us start our conversation.

Isn’t it interesting to know that budgies are among the eight best-talking parrots? However, their talking is average as compared to larger parrots.

Some of the parakeets can develop a vocabulary of hundreds of words. But their gruff voices, at times, make it difficult to understand what exactly they are saying. It is better to call budgies the chatterboxes.

The Indian Ring-neck parakeets are found repeating the daily prayers in temple gardens, as observed by the Monks centuries ago. This depicts their divine and holy nature.

The amazons not only have their vast vocabulary of words that make them impressive but the clarity of their voices. They can be entertaining for the whole family as they are also good at learning tricks.

The Quaker parrots are one of the smaller parrots but may have an exceptional vocabulary similar to the larger ones. Some of the Quaker parrot’s owners have claimed that they can use even use the words in context. Isn’t it awesome!

Cockatoos have also shown talking abilities in captivity however, their training is a bit difficult. They have a sweeter and softer speaking voice, as compared to other parrots. So, you should have good understanding and listening skills, to listen from them.

The African grey parrots are also among the 8 best types of talking pet birds. The number of domesticated Greys has increased after the realization of their extreme intelligence.

They can develop an extended vocabulary. One of the best qualities of African Greys is that they can readily repeat the word, you have just uttered. The clarity of their words is the icing on the cake.

Some owners have reported their fooling by considering the mimicking of their Greys as a human family member.

The Severe macaws, a bigger member of the parrot’s family, also have some ability to mimic speech. They are too intelligent to learn short phrases and snippets of songs.

But, their unclear voices have made them second to African Greys. They are louder birds and can learn to use their inside voices, as they love to bond with their owners.

The last one is the Electus parrots. Despite their beautiful coloring, they are also famous for their talking abilities. Mostly they can readily mimic the speech of their owners.

Hope! You have enjoyed reading about the best-talking birds.

Concluding my article, “At What Age Do Parrots Start Talking?” I would suggest that work on your skills and first train yourself, before starting the training of your bird. You should have a bundle of patience as well as regular training sessions to make your bird speak.

Despite all this, if your bird fails to speak, then do not ever stop loving him. We have no right to hate anyone because of his disability. Am I right?