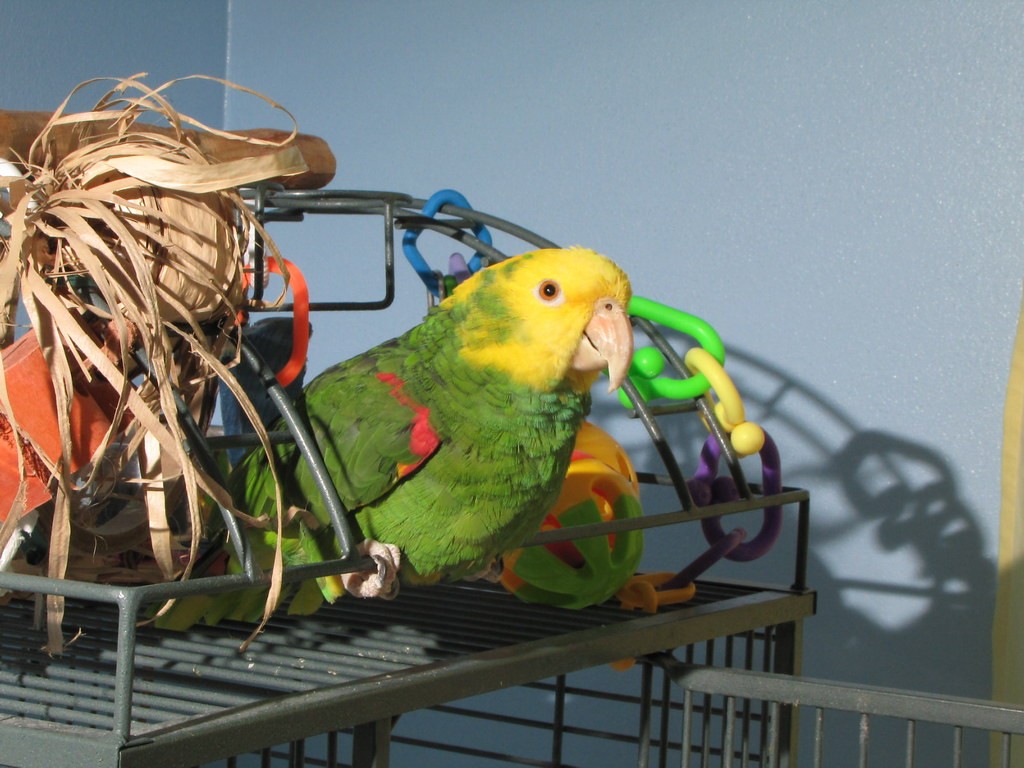 Double Yellow Headed Amazon parrots are in demand for vibrant yellow. They have an attractive and charismatic plumage that has blessed them with eye-catching beauty. They are talkative, enthusiastic, and lively birds enough for their owner or even a whole family.

Also Check: At What Age Do Parrots Start Talking?

However, they are also found in several other regions of the world. These regions include North East of Guatemala, Honduras Border, and Belize.

The habitats like savannah, tropical and subtropical forests, mangrove swamps especially palm groves, under-cultivated lands, and coastal scrubs are mostly liked by them. In these areas, there are bundles of trees for nesting.

They also found in the woodlands of the Atlantic and Pacific oceans, ranging from Nuevo Leon and Southern Tamaulipas to Tabasco. They also spread on the Pacific coast from Oaxaca to South Colima

The Double Yellow Headed Amazons are among the most beautiful and fascinating Amazons. The striking coloration of mature adults is worth seeing.

Such Amazons have enthusiastic and lively personalities. They are adorable birds. Their excellent mimicking personalities have aroused a charm to domesticate them.

The Double Yellow Headed Amazons, mostly domesticated male can be dangerously aggressive in breeding conditions. It would be dangerous to let them out of the cage when other family members are about until their aggressiveness subsides.

Such behavior can create problems for owners only for a few weeks of the year. But they are highly recommended pets only for experienced owners.

They are highly attention seekers, they may scream to get so. It is advised to talk, play, and give him favorite foods when he is quiet. Ignore him if he screams. Hopefully, he will understand that such behavior is not acceptable.

The Double Yellow Headed Amazons are monogamous birds. They mate with the same partner throughout their life.

They are housed in the hollow cavities of the trees.     Their breeding season is from February to June.

The females lay 2-3 three eggs per clutch and incubate for 26-28 days. The male regurgitates the female when she incubates and feeds the young ones.

When the chicks have grown to 8-12 months they leave the nests. The young ones become ready to breed after 3-4 years.

The Double Yellow Headed Amazon usually has a longer lifespan and a healthier life. However, they can be vulnerable to some diseases.

Chlamydiosis is a bacterial infection that may induce nasal discharge and fluffed up feathers in your bird.

They can get malnutrition or nutritional imbalance like deficiency of vitamin A. They may get obese due to the lack of exercise.

The Polyomavirus is another viral infection that may cause weight loss and anorexia to your bird. You should be very careful about his health, as he can easily catch these diseases.

The population decline is due to the stealing of chicks from nests and loss of habitat. In 1940 in Veracruz, a hundred or more birds have flown from their feeding grounds to forests.

The IUCN Red List reports that in 1994 their population has reduced to 7000 individuals. This estimates 4700 adult birds.

Also Check: The Amazon Parrot Can Live About How Long?

How Much Is A Double Yellow Headed Amazon Parrot?

The price of Double Yellow Headed Amazon parrots ranges from $400-$1000. The price largely depends upon the rarity of the parrot.

Illegal trade of the Double Headed Amazons is flourishing day by day. If you ever found a Double Yellow Headed Amazon parrot for sale make sure that the owner must have got it from a legal source.

The variety “Magna” is bred to get additional yellow. Such Amazons have a higher cost. The “Extreme Magna” has as much yellow as Tres Maria’s birds.

Again, don’t if you ever found a Magna Double Yellow Headed Amazon for sale, then search for your bird’s source.

Also Check: What Parrot Is Right For Me?

What Do Yellow-Headed Amazon Parrots Eat?

It is not difficult to feed your Yellow Headed Amazon Parrot. Isn’t it? If you have exposed your bird to versatile food earlier, then he will eat everything in his cup.

They have a hearty appetite and rarely say “No” to any diet. So, you should be very careful while choosing food for them.

The Double Yellow Headed Amazons eat fruits, berries, nuts, vegetables, and soaked beans and pulses. They should make about 40 % of their regular diet.

The rest of the 60 % of the diet should include pellets or seed mixture. The sunflower seeds and peanuts should be avoided as they are fat-enriched. It is better to buy pellets without artificial flavors and colors.

To prevent vitamin A deficiency, they should be given vitamin A enriched foods. Vegetables like broccoli, red bell peppers carrot, sow thistle, dock vegetables, and dandelion can serve the purpose.

Hawthorn berries, meat bones (without sharp edges), cooked potatoes, and hard cheese are also appreciable. Intake of bones and cheese will provide the necessary calcium to your bird.

Negligence regarding Double Yellow Headed Amazon’s diet is appalling. It is best to search for their balanced diet either using a book or by scrolling through the internet (same as you are doing now).

Before going to pay a large scale to buy one, you should get a complete guide about their diet. Deficiency of certain nutrients especially vitamin A may draw your bird towards death. No one wants to lose his lovely bird.

Also Check: How Long Does A Parrot Live?

The Yellow-Headed Amazons can enjoy a longer lifespan of about 80 years. They need an owner, who can understand the responsibility of such a bird.

Despite, their aggressive behavior and moods they are highly trainable and lovable birds. They can fiercely bond to human family members and want to gratify their owner. However, at maturity, they choose one person to love.

The Yellow-Headed Amazons are talkative and over-excited birds. At times, they burst into songs. They have loud vocals and can instantly pick up words.

You can train your Amazon to talk and sing. Start with simple and short words that your bird can clearly understand.

Every time you should pronounce the word very clearly. It will make learning easy for your bird. Repeat the word again and again so your bird can memorize it.

Over-repetition of words might tire out your bird. A maximum of 10 times repetition is enough during each session.

The Amazons will love to call out the names of their favorite meals. Teach them while you are feeding. Speak out several times, the name of the food you have served him. Soon your bird will start mimicking you.

Birds can understand emotions. They usually mimic those words that are emotionally uttered. Always talk to your bird in a soft and enthusiastic tone.

The use of a friendly and excited tone can draw your bird’s attention. He will start hearing you attentively. Hopefully, sooner he will start mimicking your voice.

It is better to take your bird to a quiet room for the session. There should be only your voice. Make a routine to talk to your bird daily and reward him after every good attempt.

To teach your Amazon singing, utter 1-2 words long lyrics of the song in a singing voice. The sooner your bird will start mimicking you.

Instead of singing yourself, you can also play songs near his cage. He will pick up words that are simple and catchy.

If your bird starts jumping and bobbing after hearing any specific song then he is liking that song. Repeat that song more than once a day.

It tends to scream twice a day, at dawn and dusk. Such screaming is not a behavioral issue, it’s normal. However, screaming all day long will be annoying. Long-term screaming indicates his inattentive owners.

The illegal trading and deforestation of such birds have made them endangered. It is a humble request to always search for the source of the bird before buying. Maybe you will become a part of such horrible acts unintentionally.