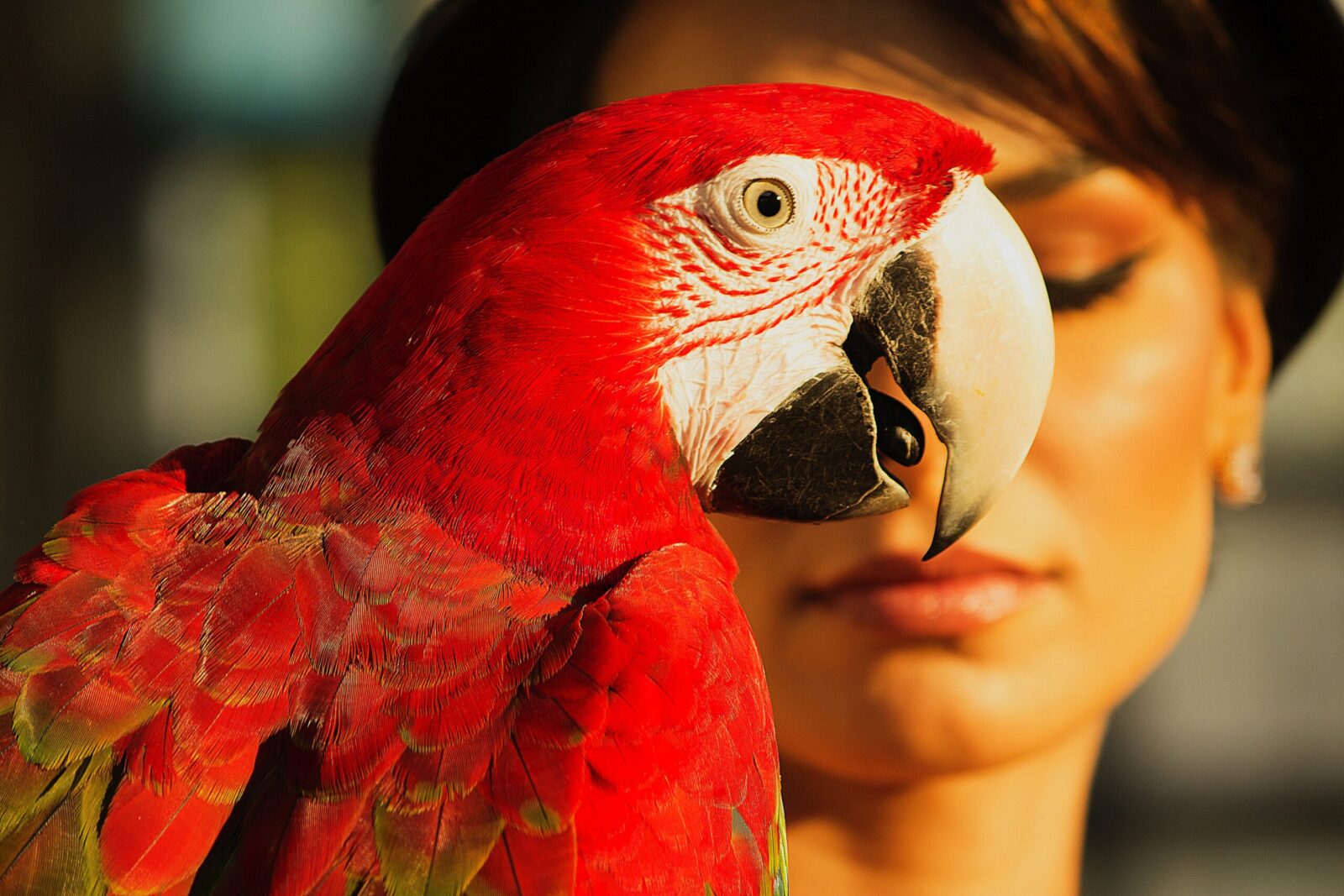 Are you in search of long commitments birds? In this regard, parrots will be the best choice. Are you anxious about which species will have a longer lifespan? How long do your lovely parrot species live? If you have just nodded, then go through the article, “How Long Does a Parrot Live?” Hopefully, all your queries will be resolved.

Parrots are the longest living mammals as compared to their sizes. There are certain factors (you will go through in this article) that aid parrots to have a longer lifespan. Despite the biological make-up, the domesticated parrot’s lifetime largely depends on your care, balanced diet, hygiene, and regular-vets checkup.

How Long Does A Parrot Live?

Parakeets have an expected lifespan of only 5 years. However, some of them can live up to 18 years.

Parakeets are also known as budgies, and are the most popular birds in the world. They usually have a varying lifespan and their maximum age differs regarding various factors.

The canaries originated from Macaronesian Island. These are little songbirds that were brought to Europe by the Spanish, for the first time.

The canaries are beautiful birds that have a wider color range including white, red, brown, orange, and yellow. Their average lifespan is 10 years in captivity.

The caiques are found in the Amazon Basins. They are sturdy and small-tailed birds. These birds are famous for their vibrant colors. Their average lifespan is 50 years in the wild.

A group of 21 species is referred to as ‘cockatoos’. They are popular for their crown and curved beaks.

Cockatoos are Australian parrots. They can have an average lifespan ranging from 20-60 years. However, the exact lifespan depends on the species it belongs to.

Cockatiels or can be called miniature cockatoos are inhabited in Australia. Cockatiels can have an average lifespan ranging from 5-18 years.

Conures are playful and comical birds, famous for their curiosity. Their lifespan depends on the species. The average lifespan of all their species ranges from 10-30 years.

How long does a parrot live? Finches can have a lifespan of 5-9 years in the wild. However, the domesticated finches have a longer lifespan. They are famous for their colorful plume.

Finches and Canaries are used in mines to detect carbon monoxide. They are found almost in the whole world except the Southern Pacific, Australasia, and Antarctica.

Electus parrots depict extreme sexual dimorphism. The females can be red, blue, and purple, however, the males are bright green.

Electus parrots are found in Northeastern Australia. They are easy to breed. They have a lifespan ranging from 30-50 years. Some of them can have an even longer lifetime.

Lories can live up to 10-30 years. They have a bush-tipped tongue, used to feed nectar. The short-tailed species are called Lories while those with longer tails are called Lorikeets. They can have a small to medium size.

Jardines is also called a Red-headed parrot, due to its red or orange plume. They are inhabited in Africa.

Jardines are often green in color. They have black feathers on their wings, neck, and head. They can live up to 60 years in the wild, however, the domesticated ones may have a lifespan of about 30 years.

Macaws have 17 species. Some of the species of the macaws have been extinct, while some lie in the category of endangered and critically endangered.

Macaws can have a varying lifespan depending on the species. Some macaws have lived over a hundred years. They are social and attention-seekers.

How long does a parrot live? The love birds can have a lifespan ranging from 10-25 years. They are the smallest genera of parrots. They are kept in pairs. They can mimic human sounds if taught at a young age.

The Meyer’s parrots are the most affectionate and loving to their owners. They have a turquoise belly and are also called brown parrots. They can have a maximum age of 20 years.

Parrotlets are active birds. They require a lot of space. They are the smallest parrots and do not make noise. They require lots of care and affection. They can have an average lifespan of 20 years.

The Quakers have inhabited South America. They are active and bold pets. They are the only species of parrots that make their nests. They can live up to 30 years in captivity. However, can live even longer if kept properly.

Pionus are friendly parrots. They can have a lifetime of about 25 years. They require too much attention. They are found in Mexico, South, and Central America. The medium-sized ones are the best to keep as pets.

Senegals are calm and quiet pets. They have a great temperament as a pet. They are loving and remain too attached to their owners. They are inhabited in Africa.

The domesticated Senegals can have an old age of 50 years, while their lifespan can reduce to half in the wild.

How long do birds live as pets? Pigeons are one of the most famous parrots that are liked to be kept as pets. They are friendly and affectionate birds.

Where Do Parrots Live?

How long does a parrot live? The green parrots live in the woodlands, forest clearings, and swamp forests. They are inhabited in Central and South America.

In Western Nicaragua, their nesting spots range between El-Brujo Protected Area to El-Chocoyero.

The Canary parrots are native to Macaronesian Island. However, they are also found in Europe and Spain.

The Caiques parrots are native to Amazon basins. The Cockatoos, Cockatiels, Electus parrots are inhabited in Australia.

The Finches parrots are found in Antarctica, Southern Pacific, and Australasia. The macaw parrots are native to Central and South America, however, the habitat varies for different species.

How Long Do Green Parrots Live?

The green parrots are found in Central and South America. Their home space spread from the southern tip of South Texas to Northern Nicaragua.

The green parrots are mostly green in color with a yellow beak. They are sometimes considered as pests for crops.

The green parrots feed on various fruits, seeds, and corns. They usually live in the holes of trees, whereas females lay their eggs for protection.

How Long Does An African Grey Parrot Live?

The African Grey Parrots can have a longer lifespan of about 80 years. They are native to Africa. However, they are also found in Angola, Tanzania, Kenya, and Congo.

Why Do Parrots Live So Long?

Parrots are famous pet birds, as they can have a lifetime relationship with you. How long does a parrot live? Parrots in captivity will have a longer life span as compared to wild.

The domesticated parrots are not exposed to predators. Moreover, they are protected from diseases, especially fatal ones.

Parrots have a longer lifespan regardless of their size. The high metabolic rate, resting glucose level, and higher temperature have made them long-lived birds.

It is assumed that these factors have lowered the aging parameters. However, the higher metabolic rate should decrease instead of increasing lifespan.

The age longevity in parrots suggests that they have evolved a special mechanism, to prevent rapid aging despite high metabolic rate.

The recorded data shows that flying birds especially parrots and mammals enjoy a greater lifespan, due to prevention from predators.

Another recorded data have suggested that the birds that take an effortful exercise daily, will have a longer lifespan. Parrot’s search for food, in the wild, is another factor for their long lifetime.

Birds, especially parrots, have a lower level of oxidative damage in the mitochondrial DNA. This process releases free radicals and causes membrane aging.

The membrane aging, in turn, leads to malfunctioning or reduced activity of the membrane processes. This lower-level process has gifted parrots with life longevity.

It suggests that parrots, especially macaws, may have a lower level of reactive oxygen species (ROS) or may have some other strategies to lower the mutilation caused by such processes.

The white matter in the CNS of the parrots causes regrowth of the neurons. This white matter regrowth goes against the mammalian principle. This regrowth is also an amazing factor for a longer lifespan in parrots.

Do Parrots Live For 140 Years?

When I heard of “parrot lifespan 140 years”, I got drowned in thoughts. No, parrots can’t live for 140 years. I haven’t heard of any parrot with such a gigantic age. However, we can say that 140 years can be the maximum age of the parrots.

How Long Do House Birds Live?

Birds, especially parrots, can have a longer lifespan in the house. Some birds in captivity may have a double lifespan or even comparable to humans.

For example, birds like cockatiels and parakeets can have a longer lifespan of about 20 years in captivity.

Similarly, macaw parrots can have a longer lifespan, even up to a hundred years in captivity. The lifespan of a bird largely depends on his biological make-up. However, some other factors may enhance their lifespan.

Make sure the best hygienic practices for your bird. This will result in reduced viral and bacterial infections and also lower disease-causing factors in the surrounding of your bird.

You should always wash your hands before handling your bird and always keep his cage clean. Avoid contact with your bird when you are sick.

A balanced diet is also a remarkable factor in increasing the lifespan of your bird. A fresh and varied diet, full of the essential ingredients will keep him healthy and fit.

Make sure that your bird is having a proper intake of vitamins. This will keep your bird away from diseases, by boosting the natural immunity.

Do not miss your bird’s annual checkup by his avian-vet, though he is healthy. It is because birds are very good illness-hiders in the wild. Expression of their weaknesses can make them an easy predator.

A trained avian-vet can get subtle signals that your bird is suffering from an illness that you might miss. Keeping regular vet appointments can help your bird to live a longer and healthier life in the house.

Concluding my article, “How Long Does a Parrot Live?” I will only say that each species has its specific lifetime. The only thing you can do is to provide the best hygienic conditions and a balanced diet to your parrot.

Furthermore, visit his vet regularly even though your bird has not shown any illness.  This will not only make your bird live a longer as well as healthier life. As no one wants to give his parrot a life full of suffering and illness.

Author: Mehrosh Ahmer
Hi, this is me Mehrosh Ahmer and an expert content writer and have been writing for many months, further more! Since my childhood, I’ve been a zoophilist. I also have pet parakeets so I love writing about them too. I hope these articles help you learn all the stuff you wanted to. They will make you a professional parakeet owner for sure!