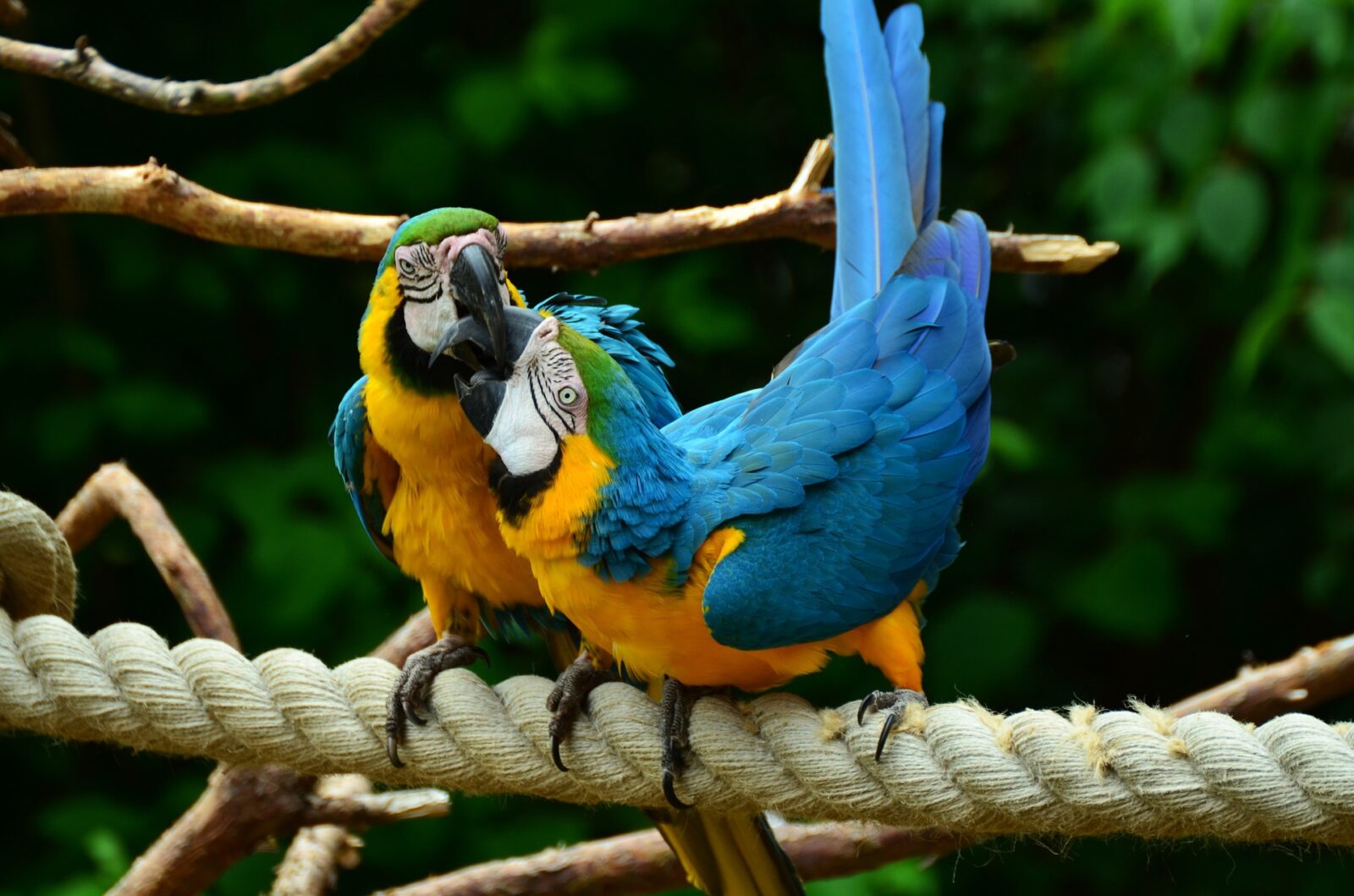 Are you interested to seek knowledge about the natural habitat of macaws? Have you ever wondered how macaws live in the rainforest and what they eat there? If you are geared up to absorb all the information then go through the article “Facts About Macaws in The Rainforest” So, let’s start our article.

Macaws have an enchanting beauty that can keep your gaze and gape at this bird. They have beautiful, long tails that are gracefully patterned. Macaws are the largest among all the parrots. The deforestation in the rainforest and the endless captivity-demand for this bird have slipped it into the category of endangered species.

So, let us study more about the life of the macaw in the rainforest.

Facts About Macaws in The Rainforest

The rainforest of South America is inhabited by 17 species of macaws. Among these species, some are heard to be extinct while some are endangered or critically endangered in the rainforest.

Macaws are categorized as intelligent and social birds. They are mostly found flying in flocks of around 30 macaws.

The macaws use vocal calls like squawking and screaming to communicate in the rainforest. Some macaws in captivity have an extraordinary character to mimic human sounds.

Macaws have the same breeding partner throughout their lives. The males hunt and share food with the females when females sit on the eggs to incubate them.

The macaws have an average size of 30-100 cm and an average weight of 129-1695 g. The Hyacinth macaw is the largest among all the parrots. Their wingspan is more than 4 feet.

What Do Macaws Eat in The Rainforest?

Macaws are omnivorous birds. They can enjoy the flesh of other animals and plants in the rainforest.

Macaws have 4 toes on each foot; two facing forward and two facing backward. This adaptation allows them to catch their prey firmly in the rainforest.

The humanoid-similar toes of macaws allow them to perch on trees, without slipping and hold on to branches heroically. The strong beaks of macaws help them to break nutshells and seeds.

From plants, macaws eat seeds and fruits. They can crack the nuts using their strong beaks. They also eat a variety of vegetables. The macaws also eat berries in the wild.

In the rainforest, macaws eat insects and eggs. They can hunt and tear the flesh of small mammals and reptiles to eat.

Besides flesh, macaws can fulfill their protein needs with legumes, nuts, and insects, abundantly available in the rainforest.

Macaw is a diurnal animal. They sleep during the night and spend the whole day in search of food.

The macaws in the rainforest have varied food availability. They can enjoy the vast variety of fresh food and flexible food choices.

The scarlet macaws are found in Brazil, Trinidad, Mexico, Peru, and Bolivia. They make their nests in the trees of evergreen forests and they prefer to live near the rivers.

Due to the destruction of their natural habitat these macaws are going towards extinction. Many of these birds have accepted captivity to protect themselves.

The government is working to prevent the extinction of these splendid macaws. They have hollow bones and strong wings. They can fly at up to a speed of 56 kilometers per hour.

They have a hard beak that helps to crack open nuts and tongue to pull up kernels from the shells. Their predators include snakes, harpy eagles, jaguars, humans, monkeys, and toucans.

They are mostly vegetarian so they can only feed nuts, seeds, and fruits. They cannot go for the flesh of animals.

How Far Can Macaws See?

Good eyesight is necessary for hunting birds. Macaws do not have eyesight as good as that of raptors however, their eyes are adapted according to their environment.

As macaws are active during the day, so the bulbs of their eyes are substantially shallow and flattened.

They have a narrow skull with eyes stuck sideways. The macaws can only see with one eye at a time. The amazing positioning of their eyes allow them to see 360 degrees.

Macaws can have most of the view that is in front, above, back, and below. Macaws can move their eyes inside the socket. This amazing quality allows them to have an eye on prey without moving their heads.

Macaws have a 2-3 times better vision than humans. Macaws can see a wider spectrum of colors than humans. They can see red, blue, green, and also violet color.

What Do Macaws Eat?

Macaws need a balanced diet, slightly higher in fats than other birds. This fact does not allow the abundant intake of seeds wholly.

The diet of macaws should be planned by taking into account that they are not wild; who can fly freely, offers a wide nutritional aspect, and that promotes foraging instincts about macaws’ diet.

The seed mixes available in the market, usually contain seeds that are higher in fats, unlike those found in the rainforest.

Complete reliance on seeds can cause health problems to your bird. In the beginning, you can go only for seeds, however, you should slowly reduce the number of seeds while introducing new food types to your macaw.

The macaws also eat fruits and vegetables that can fulfill the needs of carbohydrates in their body.

The safe vegetables that macaws can eat are broccoli, carrots, bell peppers, spinach, and swiss chard.

Why Are Macaws Endangered?

Macaws’ habitat is the rainforest of Central and South America. Deforestation is the major cause of the extinction of some species of macaws, while some of them are endangered. This is the bitter fact about macaws in the rainforest.

Along with the increased popularity of macaws as pets, a black market of rare breeds of macaws has flourished. This is another major cause of the increased extinction risk of macaws.

Going towards the closing of my article “Facts About Macaws in The Rainforest”. I would say that the natural habitat of macaws is moving towards destruction due to humans.

Is it our love for the bird that keeps him as captive thereby destroying his natural habitat? No, it is not loving it is selfishness. The best way to express your love is to save their natural habitat. It is not only the government but also we must try our best to ease the little souls.