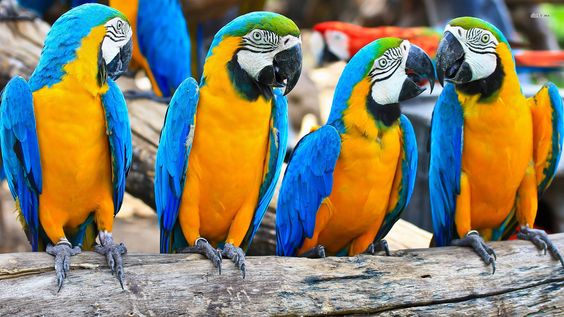 The blue and gold birds are extremely intelligent birds, with a combination of emotions like love and jealousy. It is an extraordinary pet, only suitable for those who can handle such attention seeker pets. The lovers of this pet whenever they find a blue and gold macaw for sale, buy it shortly.

“Blue and gold macaw”, the name describes the endless and eye-catching beauty of his golden chest and blue feathers. Wow, what a beauty!

All colors are so majestically arranged on this bird, that you can`t stop praising it. It has zygodactyl feet and a hooked beak.

The blue and gold macaw`s body is 3 feet long and the wingspan is 4 feet. It can be a bit larger, with a weight of about 3 pounds.

The blue and gold macaw lives in the forests and woodlands of Central and South America. Their habitats include Brazil, Paraguay, Bolivia, parts of Panama, and Venezuela South to Peru.

The blue and gold macaws live in flocks. Their bonded pairs always fly so closely, that their wings are nearly touching.

The blue and gold macaw often flocks to the height of the mountains. That mountain is named “macaw licks” regarding their flocks.

They are messy-eaters. Their strong beaks are so designed to crack hard nuts, making them adaptable to all sorts of seeds and nuts.

The blue and gold macaw price ranges between 12 to 15 hundred dollars.

Checkout: What Do Macaws Eat In The Rainforest?

How Smart Is A Blue and Gold Macaw?

The blue and gold macaw is the second most intelligent parrot. Their walnut-sized brain contains an incredible number of neurons, especially in the forebrain. The connectivity of the neurons is possibly similar to humanoids.

The blue and gold macaws have predictive, logical, and creative thinking. The predictive thinking allows the macaw to hide his food if he feels any threat of being stolen.

The IQ and EQ of a macaw are comparative to a human toddler. Macaws fluff up their feathers, to express their emotions.

Love and jealousy, the two human emotions, are also felt by the blue and gold  macaws. According to some macaw owners, the macaw shows his love with kisses, hisses, flashes his eyes, and fluff up his feathers.

In the wild, blue and gold macaws produce different sounds to communicate with their flocks, sharing hunting ideas, and mark territory. In captivity, you can train your young macaw to produce human sounds and speak human words.

As macaws are extremely intelligent, they can get bored easily, especially in a lonely home. You should provide complex play gyms to your macaw, similar to those at pet stores. This will provide your macaw, good mental and physical activity.

How Long Do Blue And Gold Macaws Live?

However, there is a lot of confusion about his average lifespan in captivity. A blue and gold macaw named Charlie the Cursor, has lived about a hundred years. According to his owner Charlie, he turned 112 years in 2011.

Checkout: How to Clean a Parakeet?

Where Blue And Gold Macaws Aggressive?

The blue and gold macaw behavior varies depending upon their emotions, health conditions, surroundings, mental state, and training.

Young blue and gold macaws are easy to train and socialize, due to their curiosity, friendliness, mild temper, intelligence, and playfulness.

However, sometimes blue and gold macaws may become aggressive, territorial, and rebellious. This behavior is an attempt to divert your attention towards them.

He will show his aggressive behavior with a bite. It will be very difficult for you to remain calm and not to yell at your bird, but you should try your best to keep yourself peaceful and quiet.

If your bird shows aggressiveness at times, then better to consult a veterinarian. Maybe your macaw will have some health issues or heart problems, that’s why he is behaving aggressively.

What Can You Not Feed A Blue and Gold Macaw?

Avocado acts as a poison in the digestive system of the blue and gold macaws. So, your bird should not eat it, even accidentally. You should also not serve gravel to your bird.

Onions that are cooked, dehydrated, or even raw contain a bulk of sulphur compounds. They can cause red blood cells to burst, leading to anemia.

Garlic, mushroom, kale, and cabbage are not good for blue and gold macaw`s stomach. The caps and stems of mushrooms may cause liver failure to your bird.

Remove the stringy portion of celery, before serving to your bird. It may cause bowel blockages. The highly acidic fresh tomatoes should also be avoided.

Checkout: How to Tell Parakeet Gender?

What Are Macaws Favorite Food?

Unlike other birds, macaws have 4 toes; two facing forward and two facing backward. This allows the macaws to hold the food in their claws, crack it open or bite it with the beak.

This behavior is very similar to humanoids- they use their hands to hold their food. In the wild, macaws have a wide variety of fruits, vegetables, berries, nuts, and seeds to eat.

The favorite vegetables of macaws include broccoli, green beans, zucchini, and cucumber. Squash, romaine, carrots, and tomatoes are also liked by macaws.

Banana, strawberries, apples, and grapes are the favorite fruits of macaws. Despite these, pears, papaya, mango, kiwi, and melons are also loved by macaws.

Macaws also like seeds. Seeds are rich in fats that are very essential for some species of macaws. Sunflower and peanut seeds are the macaw’s favorite ones. However, seeds should be given only in small amounts.

Checkout: what do baby parakeets eat?

Yes, blue and gold macaws can eat bananas. Banana is one of the safest fruits you can give to your birds, for nutritional gain. Personally, I have seen many macaw owners serving a bunch of bananas to their Blue and Gold Macaw.

In this article, I have discussed the blue and gold macaw facts. They have gained popularity due to their gorgeous appearance. You should go through a complete course of study before you place the blue and gold macaw order. In order to make your guide, we have tried to help you by enhancing “Blue and Gold Macaw Facts” in the above article. Hope you’ll all like it!