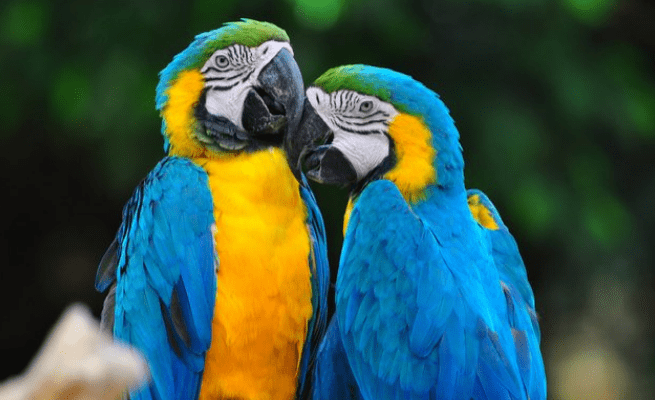 Have you ever wondered how long do macaws live? Do macaws make good pets? If you’re looking for answers to these questions, read this article to the very end. You’ll discover interesting facts about the “Blue and Yellow Macaw Lifespan” and their behavior.

Macaws are large beautiful parrots including 18 species of colorful parrots. They are widely famous for their fascinating colors, friendliness, and social behavior. They are native to tropical North and South America. Macaws’ lifespan range from 25 to 70 years mainly depending on their species and their habitat.

One of the species Blue-and-yellow macaws, scientifically known as Ara ararauna are beautiful, intelligent, and majestic parrots. Blue-and-yellow Macaws’ size is quite large being about 35 inches in length, weigh from 0.9 to 1.8 kg and have a wingspan of up to 45 inches.

Also check: How to Clean a Parakeet?

The average lifespan of Blue and Yellow macaws’ is 30-40 years but it mainly depends if it lives in the wild or is held in captivity.

Adult Blue and Yellow Macaws’ lifespan is much shorter in the wild as compared to captivity. These macaws usually live between 30 and 35 years in the wild.

The small lifespan in the wild is due to the reason that these birds are preyed upon by other larger birds and wild animals such as snakes etc. The other reason for decreased survival of blue and yellow macaws in the wild is the illegal capture causing them to become nearly extinct in some parts of the world.

Blue and yellow macaws live much longer in captivity since they are provided with better care and protection. When taken good care of and given proper food and protection, these birds can live more than 50 years or even up to 60 years.

If you’re thinking of bringing a macaw to your home, you can expect it to live for around 30-60 years. They make lifelong companions.

Also check: What Do Parakeets Like to Play With?

How Long Do Blue And Gold Macaws Live In Captivity?

If a Blue and Yellow Macaw is well-cared as pets or when held in captivity in zoos, its lifespan is affected in a positive way. Their longevity increase when you provide your beautiful parrot with adequate housing, correct proportion of food, adequate time and attention, and most importantly love. All these will make you able to spend long and colourful years with your great companion.

Yes, blue and yellow macaws make really good pets. They are one of the most popular pets nowadays due to their marvellous personality, easy breeding habits the reasonable pricing. They live much longer than other common pets such as cats and dogs.

Blue and Yellow Macaws can be either phenomenal pets or a pet owner’s worst nightmare. Their intelligence and friendly behaviour makes them a great pet. Their sociability, sweet disposition, intellectual behaviour, and talking ability make them more attractive. They are considered to be one of the most trainable and intelligent parrots as they can mimic human speech.

Blue and yellow macaws can make excellent pets when in the right hands. They become very attached to their owners in a very small time period. They tend to learn tricks and new words very quickly. Blue and Gold Macaws’ behaviour makes them popular headliners at bird shows as they are fantastic birds for tricks.

They are very well adaptive to different people and are loving towards their owners. Around the house, blue and yellow macaws can act like well-trained home dogs. Their social and loving behaviour makes them popular pets.

On the other side, if their substantial requirements aren’t met or even well-trained blue and yellow macaws can often turn into screamers and biters. They scream or make other loud noises for attention. They can even pluck their feathers in stress. This is why behavioural guidance is very important to prevent these habits from forming when kept in captivity.

If you’re considering keeping them as pets, you should have a large space. It’s recommended to have space at least 50 feet long so that they can fly easily. Moreover, you also need to make sure you are willing to put in the time and effort to keep them happy and healthy.

How Long Do Macaws Live Up To?

Macaw lifespan is not a simple question as it depends on various factors such as their species, their place of living, and the type of care they are being provided. It also varies in the wild and when held captive and also from species to species.

Being one of the largest parrots, wild macaws can live approximately up to 60 years. The lifespan varies greatly in various species. They can live even longer in captivity with proper care. In a report of 2013, it was found out that the oldest pet macaw has lived for 112 years.

Blue and yellow macaws when in the wild mostly live an average life of thirty years. In captivity, they can live to be up to an average of 60 years or even longer with adequate care.

The Scarlets, another beautiful species of macaws, can live up to 40 years in the wild. In captivity, a colourful Scarlet Macaw’s lifespan can be up to 50 years. Some of these birds can even live up to 75 to 90 years in captivity if it treated well by their human family.

Another species of macaws, the Red-and-green Macaw’s lifespan in captivity can reach up to 70 years or longer. These extraordinary birds live shorter in the wild, an average of 25 to 30 years.

Also check: Where Do Parakeets Come From?

How Many Blue And Yellow Macaws Are Left?

The decline in the population of blue and yellow macaws in the wild due to various reasons such as hunting, trapping, and habitat destruction.

Most of the adult macaws die while protecting their young ones. Most of the young ones don’t survive in severe environmental conditions and are susceptible to early death.

Also check: How to Take Care of Baby Parakeets?

Macaws are some of the most popular and loved pets. They are not like any ordinary birds. They are majestic, have social chatty personalities, and intellectual behavior. A healthy blue and yellow macaw’s lifespan in the wild is up to 30 years. As pets, they make amazing companions and can live up to 50 to 60 years when provided adequate care and nourishment.

Read the above article to know more about their behavior and whether you should consider keeping them as pets or not.

Also check: What do Parakeets Eat in the Wild?