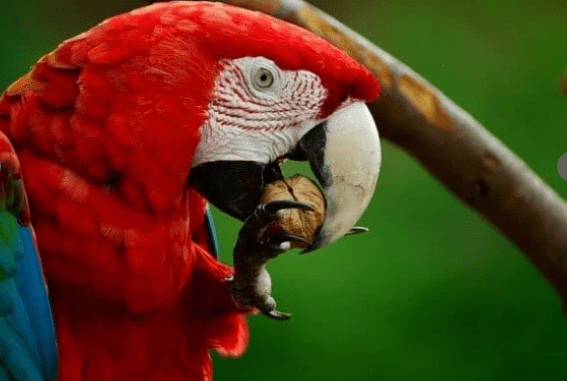 “What do macaws eat in the rainforest?” How do they survive? Have these questions ever crossed your mind? Well, if yes, then we’ve for the right answers for you. In this article, you’ll learn about macaws diet, their adaptation, and many more interesting facts about scarlet macaws. So let’s begin.

Macaws are the largest of all parrots having almost 16 different species and ranging in various sizes from tree foot to one foot. They are native to tropical rainforests of South America and Central America. They live in the canopy and emergent layers of the tropical rainforest.

It is important to educate yourself about the macaw’s diet in case you’re considering keeping one as a pet. A macaw’s diet includes various food depending upon its natural habitat and the season.

What do macaws eat in the rainforest?

Macaws usually eat a huge variety of foods they find in their natural habitat. They search for foods such as leaves, fruits, nuts, seeds, grass, berries, insects, and bugs to feed on while living in the rainforest.

Macaws’ diet is greatly varied throughout the year due to various foods being available in different seasons.

In the rainforest, macaws live by feeding on fruits and vegetables and search for various insects such as grasshoppers, snails, etc.

Nuts and seeds are also included in their food in the wild. They also eat leaves, flowers, fresh grass, and leaf buds from plants.

In the Amazon forests, some of the components of their diet such as some seeds might be toxic. To neutralize these toxins in their diets, the macaws complement their diets with large amounts of clay. The clay is usually found near the river banks.

Please check: How to Clean a Parakeet?

What type of food do macaws eat?

A simple answer to this question is that macaws are omnivores which means that they can eat both meat and vegetation. Their diet includes vegetables, leaves, fruit, and meat such as insects.

The diet of the macaws in the wild or captivity might be slightly different but for most of the part, they eat a lot of the same foods.

Like all the other animals, macaws need a proper balance of proteins, carbohydrates, fats, vitamins, minerals, and water. The Macaw diet mainly consists of seeds, nuts, berries, fruits, and insects while it’s living in its natural habitat.

Macaws also love ripe fruits. There is a huge list of fruits that macaws can safely eat such as bananas, oranges, apples, pears, strawberries, dates, apricots, and many more.

Macaws also need a healthy portion of protein in their diets. What do macaws eat for protein? A macaw can eat insects, nuts, and legumes as a source of protein. A protein-rich diet will help a macaw’s feathers to grow properly.

Seeds and nuts that macaws eat usually contain sunflower seeds, safflower seeds, millet seed, canary seed, peanuts, and maybe some dried fruits. These are a great source of fats as well as vitamins for them.

One of the species of macaws, the Scarlet macaws is mostly vegetarian. They primarily eat nuts, seeds, fruits, and leaves. Very occasionally they eat insects.

Please check: What Do Parakeets Like to Play With?

How does a macaw survive in the rainforest?

Macaws survive by being effectively adapted to their habitat like other creatures. They are mostly found in tropical and forested areas.

Most of the macaws have vibrant and bright feathers. This is perfectly suited to life in the rainforests of Central and South America. They fit flawlessly into their surroundings.

Macaws have an amazing structure that allows them to easily fly through the tall trees in the forests and land perfectly on the branches. They have beautiful, graceful, long tails and pointed strong wings that enable them to fly swiftly through the rain forest.

Macaws have large, robust beaks that help them in cracking nuts and seeds very easily. They can use these beaks as an effective tool to grasp things as well such as insects and branches.

Macaws also have strong gripping feet that help them grab and hold items and latch onto branches and food. They can use their toes to hold the food and bring it to their mouths.

The Scarlet macaw has a powerful, hooked beak to crack hard nuts and seeds. Their dry, scaly tongues with a bone inside them help them tapping into fruits. These are a few examples of Scarlet macaw adaptations to the tropical rain forest.

In the rain forests, macaws make their nests at the highest tree beaches of the tall deciduous trees. They mark their territories and identify others by their screams. They sometimes form their own noisy macaw “villages”.

Macaws sleep in their nests at night, and in the morning they fly long distances in search of food and water.

Yes, that’s right! Macaws love insects. Macaws gifted with sharp beaks and strong claws hunt for and eat insects in the wild. They enjoy insects such as snails, worms, beetles, butterflies, grasshoppers, small bugs, and a few others. They typically avoid poisonous bugs.

Insects can be significantly healthy for them. They are high in protein.

Where do macaws live?

Macaws are native to South America, Central America, and North America (Mexico). Most of these birds live in the forests, especially rainforests. Some prefer woodland or savannah-like habitats.

The Scarlet macaws’ habitat is mostly found in humid evergreens. They are found in regions of Peru, Bolivia, Trinidad, Mexico, and Brazil. Mexico. They make nests in tall deciduous forests. They usually live in big flocks and prefer living near rivers.

The blue and gold macaws usually live in wooded areas. These wooded areas are usually near to water bodies. They live in most of the Northern regions in South America and the Eastern regions of Brazil. They are also found in Eastern Panama, Bolivia and Paraguay.

Another species, the Hyacinth macaws are mainly found in lightly forested areas such as palm swamps and flooded grasslands. Most of these birds are located in the Pantanal region of Brazil.

How long do scarlet macaws live?

Scarlet macaws are exotic birds that may live up to 75 years in captivity. Typical lifespans of scarlet macaws in the wild is up to 40 to 50 years. Some of these beautiful birds may even survive more than 75 years when taken proper care of.

“What do macaws eat in the rainforest” is a common question that crosses the minds of the bird owners. Seeds, nuts, leaves, berries, plant buds, and insects make up most of the macaw’s diet in the rainforest. Their sharp, curved beak is perfect for cracking nuts and seeds.

They have amazing structures and strong toes that help them adapt to the rain forest. They live in tall deciduous trees of the rainforest near the river banks. Different species of macaws often live in different habitats and eat different foods.

To discover more about the Scarlet macaws’ adaptations in the tropical rainforest, go through the whole article.