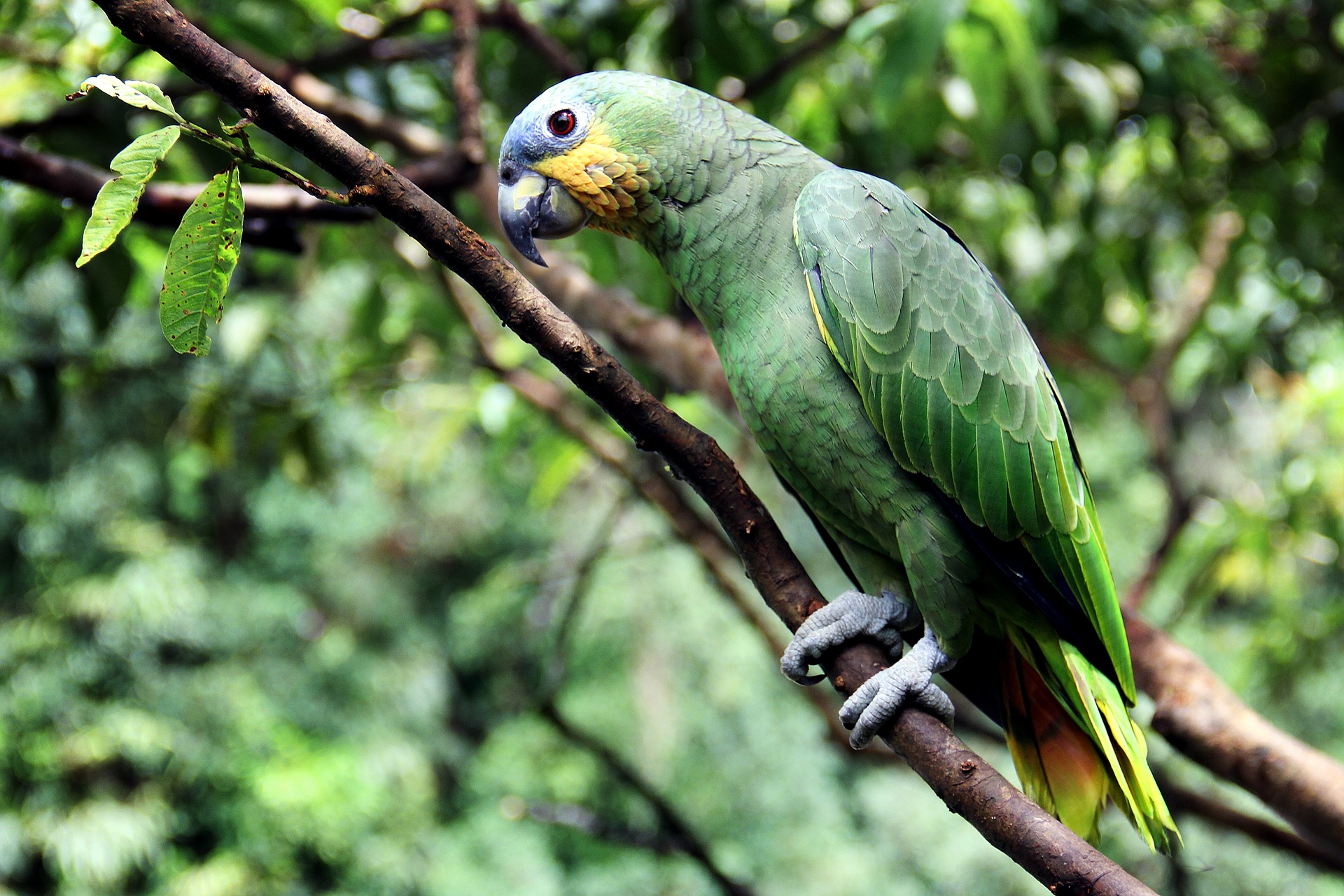 Have you ever wondered how are parrots adapted to their environment? What are the parrot adaptations in the rainforest? Just read the article, “Parrot Adaptations in The Rainforest”. So, let us begin.

The movie “Rio”. The game “Angry Bird”. Long John River the pirate. Haven’t you considered what they have in common? All three are somehow related to parrots.

Parrots are among the most famous birds in the world. They are found in movies, books, and television.

The tropical colorful birds are more popular than celebrities. They are unique and beautiful creatures. There are about 350+ species among which parakeets, macaws, and cockatoos are the most common.

Parrot Adaptations In The Rainforest

There are several parrots adaptations in the rainforest so let us discuss some in this section.

All parrots are zygodactyl. They have two toes pointing forward and two pointing backward on each foot.

The parrot’s toes close around the things. This adaptation help parrots to hold on to tree branches. It also helps them to grip all the eating stuff like fruits and nuts that they often feed.

The most interesting among the rainforest parrot facts is their strong beaks. Other than eating food they use their beautiful beaks for cleaning and grooming themselves.

The evenly distributed powder keeps them warm. It also makes them strong enough to withstand flight. Grooming is the most essential process for parrots besides eating.

Grooming helps the parrots to camouflage into their surroundings. It helps to get stronger feathers and protecting parrots from harmful parasites.

Grooming helps parrots in bonding with a mate through mutual preening. It aids new feathers from getting into position and getting through. Grooming is among the most fascinating parrot adaptations in the rainforest.

Also Check: How Many Types Of Parrots Are There?

Why Do Parrots Live In The Rainforest?

Parrot flight adaptations are worth seeing. Wings are formidable features of parrots. They make up 35 % of their body weight. Parrots function their wings using chest muscles.

Parrots use their wings for flying. They need wings for moving for food, escaping predators, finding food, and migrating to various areas.

The wings produce an uplift during flying. Air is then deflected to the rear end thereby producing upstroke. To repeat the process, upward stroke again pushes the wings backward.

Parrots also use their wings to communicate. Their wings are essential components of their body language. It is also one of the amazing parakeet adaptations

Parrots held their wings away from their body indicating aggression or fear. However, wings held in horizontal position also clues for fear. They may also tremble and shake.

The parrot wings that are held at the back symbolizes greetings. It is also known as ‘wing lift’. When parrots are comfortable and calm their wings are in a relaxed position. All wing’s positions are for captivated parrots, who communicate to their owners using such gestures.

How Do Parrots Adapt To The Tropical Rainforest?

Parrots are tropical colorful birds with robust and curved beaks. Such beaks help to crack open nuts and foods with strong casings or shells in the wild.

The parrot’s beaks are covered by Ramphotheca. It is a horn-like material. It is composed of keratin material and protects the bony jaws.

The upper bill of the beak is called Rhinotheca while the lower one is called Gnathotheca. The beaks grow unceasingly throughout their life.

Parrots keep their beaks filed by eating and rubbing at rough surfaces. The captivated parrots sometimes need beak’s trimming. However, most of the time they do it themselves.

Parrots can move their upper beak upwards independently unlike those birds who have fixed jaws. Parrots can crack bite with a force of about 300-400 PSI larger than the human bite of around 162 PSI.

Strong beaks allow parrots to easily grind, crush, and chew their food. Some of the parrot species have long and pointy beaks. They use their beaks to grab food.

For example, Kea parrots use their long beaks to dig out insects. The beak is one of the most useful and strongest tools of the parrots. It is also among the most useful parrot adaptations in the rainforest.

Parrot’s Habitat In The Rainforest

The parrots in the Amazon rainforest usually include parrotlets, macaws, and parakeets. They can be usually identified by their colors, beaks, and upright stance.

The dusky-headed parakeets occupy a large range of the Amazon regions. The short-tailed parrots are the most common in the Eastern parts of Amazons as compared to Western regions.

What Eats Parrots In The Rainforest?

Parrot information is incomplete without discussing the food facts about parrots. What kind of food they can eat and what they can’t?

The rainforest parrot also feeds on nuts. Nuts are too rich in fats. Excess fats can be harmful to parrots. They should be very selective in nuts choices. However, nuts are also essential as a protein gain.

Some species of parrots widely feed on pollens and nectars. They have special brushy tongues that help them to extract such materials.

Certain species of parrots are insectivorous. They feed on snails and insects. The Kea parrots mostly feed on nuts, fruits, and seeds. However, they lean towards flesh like infant petrels, sheep, or even adult horses.

What Layer Do Parrots Live In The Rainforest?

The rainforest parrot lives in the top layer of the trees. These parrots also live on savannahs and mountains. Parrots live in the form of “Companies”.

Rainforests are divided into layers. Under the tallest layer is the canopy layer. Sunlight, rain, fruits, and nuts are plentiful in this layer.

What Do Parrots Eat In The Rainforest?

As far as their diet is concerned, most of the rainforest parrots are omnivores however some are herbivores. The omnivorous behavior is among the list of the best parrot adaptations in the rainforest.

Parrots can eat nuts, insects, seeds of fruits, and vegetables, etc. They can snap open nutshells to eat the nuts inside them.

They are opportunistic birds. They eat whatever they find. They spend about 70  % of their daytime foraging for food.

How Do Parrots Survive In The Wild?

There are about 41 bird orders among which about half the species of birds in the world belong to the order “Passeriformes”. Parrots are most closely related to Passerines birds.

The parrot families have a unique and long-duration sleeping pattern. They remain awake for 12 hours and sleep for the other 12. They do not fall from the trees because of their strong legs and feet.

Parrots prefer to sleep in flocks to remain safe. Another interesting feature of this animal is that it can sleep with one eye open to keep an eye on danger.

Parrots first find a safe place and a mate to lay eggs. They keep their eggs secure from danger and keep warm. Calcium deficiency can cause the unwellness of parrots.

This deficiency is due to the egg binding activity in them. Some aggressive male parrots attack female ones so that females keep their eggs safe in that vulnerable duration.

Parrots eat what they find from their surroundings. Therefore, parrots remain active physically and mentally when they spend most of the time searching for food.

As far as their diet is concerned, they are omnivores and can eat nuts, insects, seeds of fruits, and vegetables, etc. They can snap open nutshells to eat the nuts inside them.

Where Are Parrots From?

Where are parrots from? Parrots are from regions including Australia, Oceania, Central America, South America, Africa, tropical and subtropical continents.

The subfamily Arinae including the amazons, macaws, and conures from parrot families. They are from Northern Mexico and Bahamas to Tierra del Fuego in South America.

The superfamily Strigoproidea is from New Zealand. The true parrot superfamily, Psittacoidea, is from Australia and New Guinea to South Asia and Africa.

Drawing towards the end of the article, “Parrot Adaptations in The Rainforest”. I would utter a few more lines.

Just like rainforest parrots have adapted a list of characteristics to adapt to their rainforest environment. Similarly, a newborn or too young parrot can adapt to captivity.

It is up to you that how much time as well as training you give to your bird to adapt to his captive environment. It needs a bundle of patience but it is not impossible.